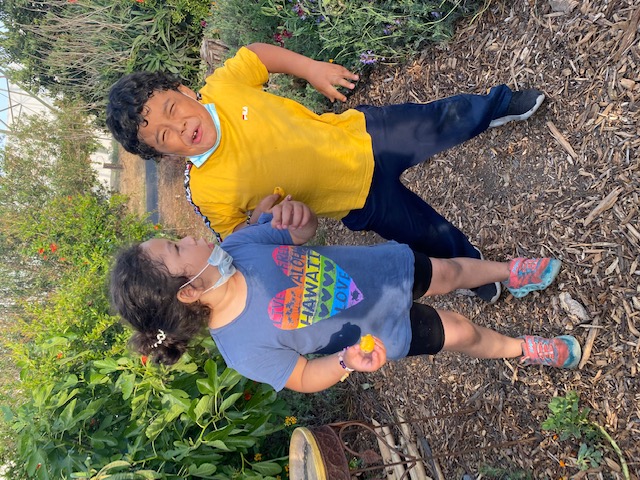 LA Green Gounds is joining a science project organized by the science writer at KPCC, Jacob Margolis. It’s called the Ozone Project, and will have LAGG and other volunteer growers all over the city growing beans to study the impact of ozone stress on plant health.

As Margolis wrote recently, the air above our city is among the country’s worst, specifically for ground-level ozone, which is an unhealthful byproduct “of the sun and heat baking all of the toxic emissions we pump into the sky.”

Margolis decided to set up a citizen science project in which people would receive beans to plant – one variety that shows ozone damage and one that does not. Of course, the growers won’t know which is which.

LAGG took beans to plant in our garden but also to distribute to growers in the adjacent community garden and to our volunteers.

“When plants take up carbon dioxide through tiny little holes in their leaves called stomata, they end up taking in the air pollution around them as well. Once the ozone enters the plant, it acts as if it’s being attacked by some sort of pathogen and works to drop the impacted leaves (usually the oldest), to stop the problem from spreading,” Margolis wrote.

He wants us citizen scientists to post updates every week – including photos on social media with hashtag #ozonebeans and @jacobmargolis. Margolis can be reached at [email protected] 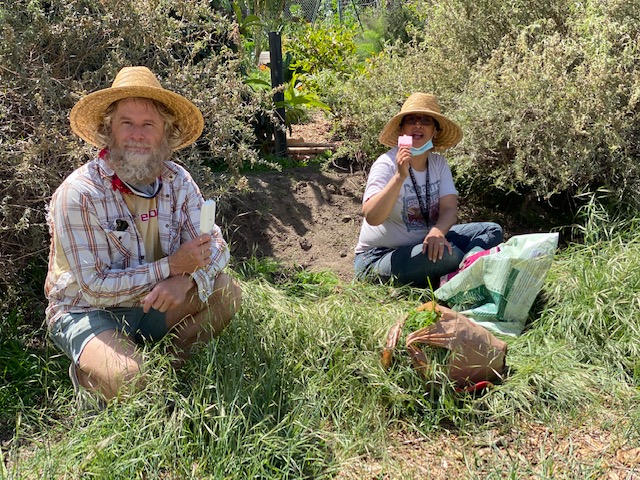 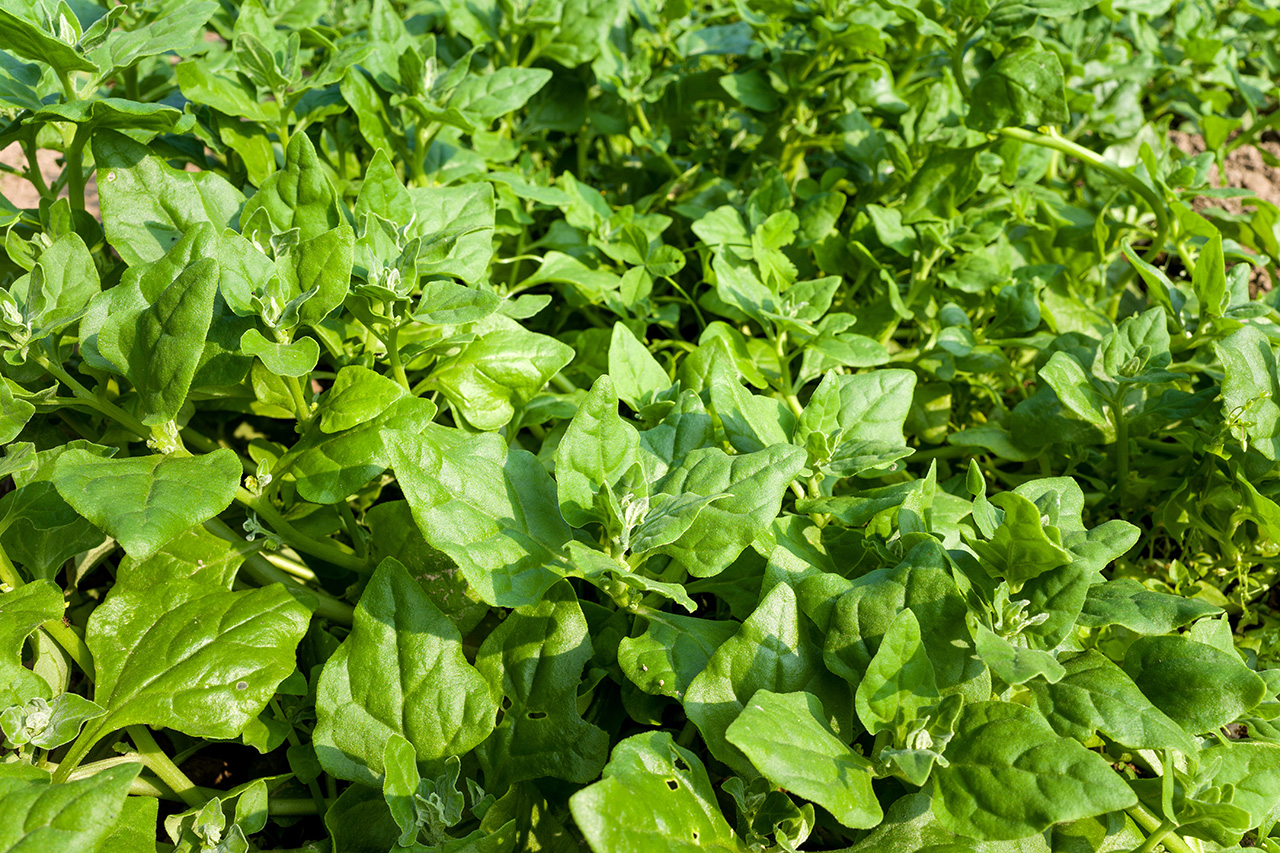 In three Victory Garden classes on Zoom, Florence Nishida brought LA Green Grounds to life with pictures and descriptions. But with just days before the final class, we got word that classes could be held outdoors, in person. Limit 10 people. Distanced, with masks. Time to reshuffle the plans and welcome students in two groups to the garden.

Everyone knew how much better the experience would be for the students, who were split into two groups to abide by the rules. Kevin Ridley, Mary MacVean and Florence’s husband, Gordon, helped shepherd the students around the garden on a hot Sunday for demonstrations and chances to try weeding, watering, harvesting and more.

If you are interested in taking a Victory Garden class, offered through the Master Gardener program, watch this space or other gardening blogs for the fall dates.

Kevin Ridley brought a worm farm to class and explained how he feeds his wriggling castings creators.

One great aspect of growing fava beans or other legumes is that they are nitrogen powerhouses, fixing it in the soil with their roots and adding it when the stalks are chopped and “forked” into the soil, as these will be. 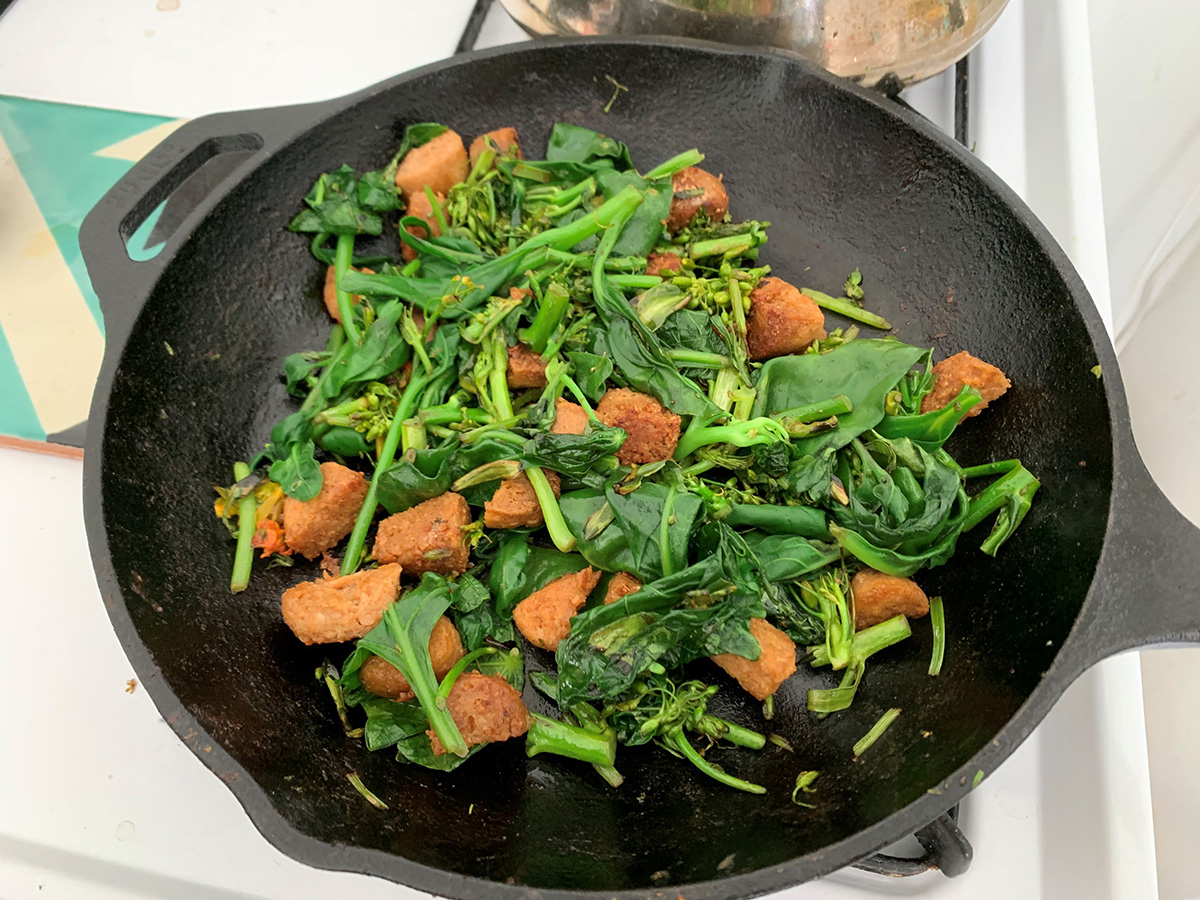 These lovely orange flowers have become a not uncommon sight in salads, in part because they're a beautiful contrast to lettuces and in part because they're delicious -- a little sweet and peppery. They're Nasturtium flowers, and they grow freely in gardens and in uncultivated places, bringing color and liveliness as they climb the sides of buildings, fences, slopes and in many spots at LA Green Grounds. But many people don't know that the rest of the plant is edible, too. The stems and leaves can go in a stir-fry, and the seed pods can be pickled like capers or tossed into salads. LA Green Grounds volunteer Kat shows various ways she cooked the plant in these pictures. 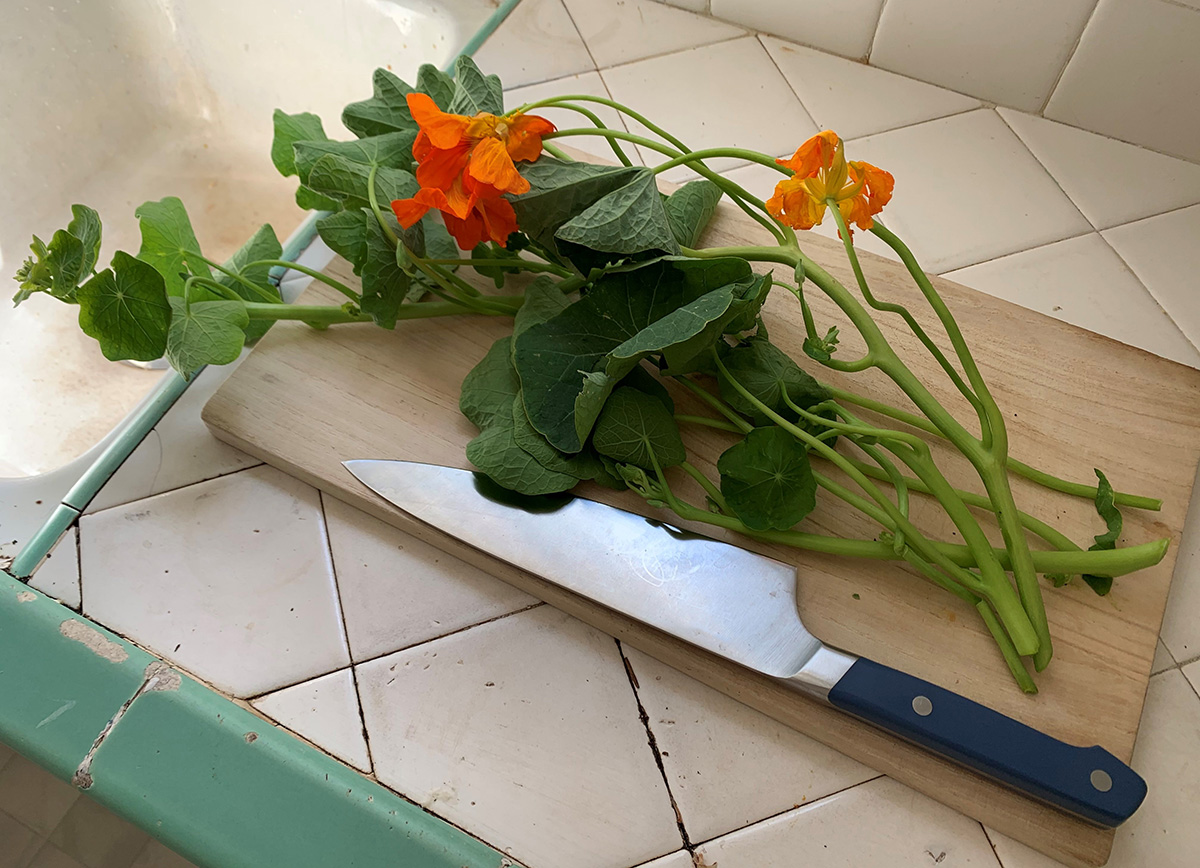 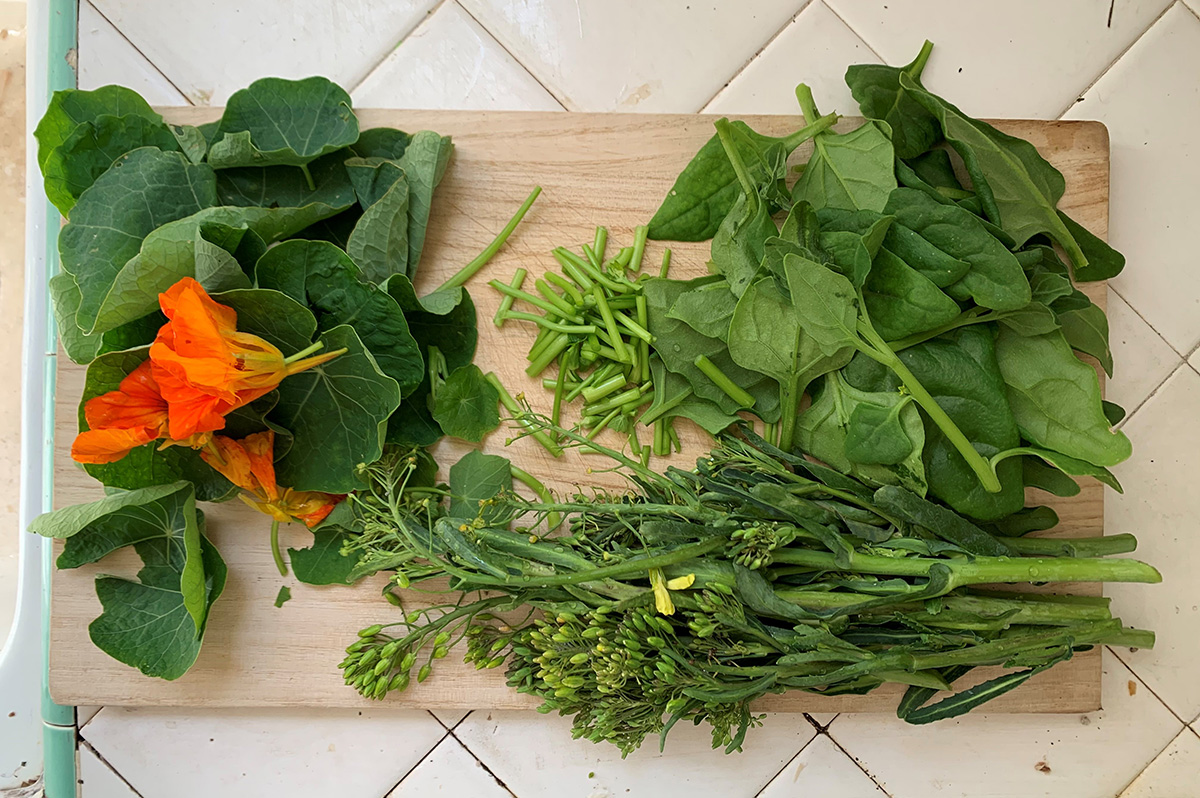 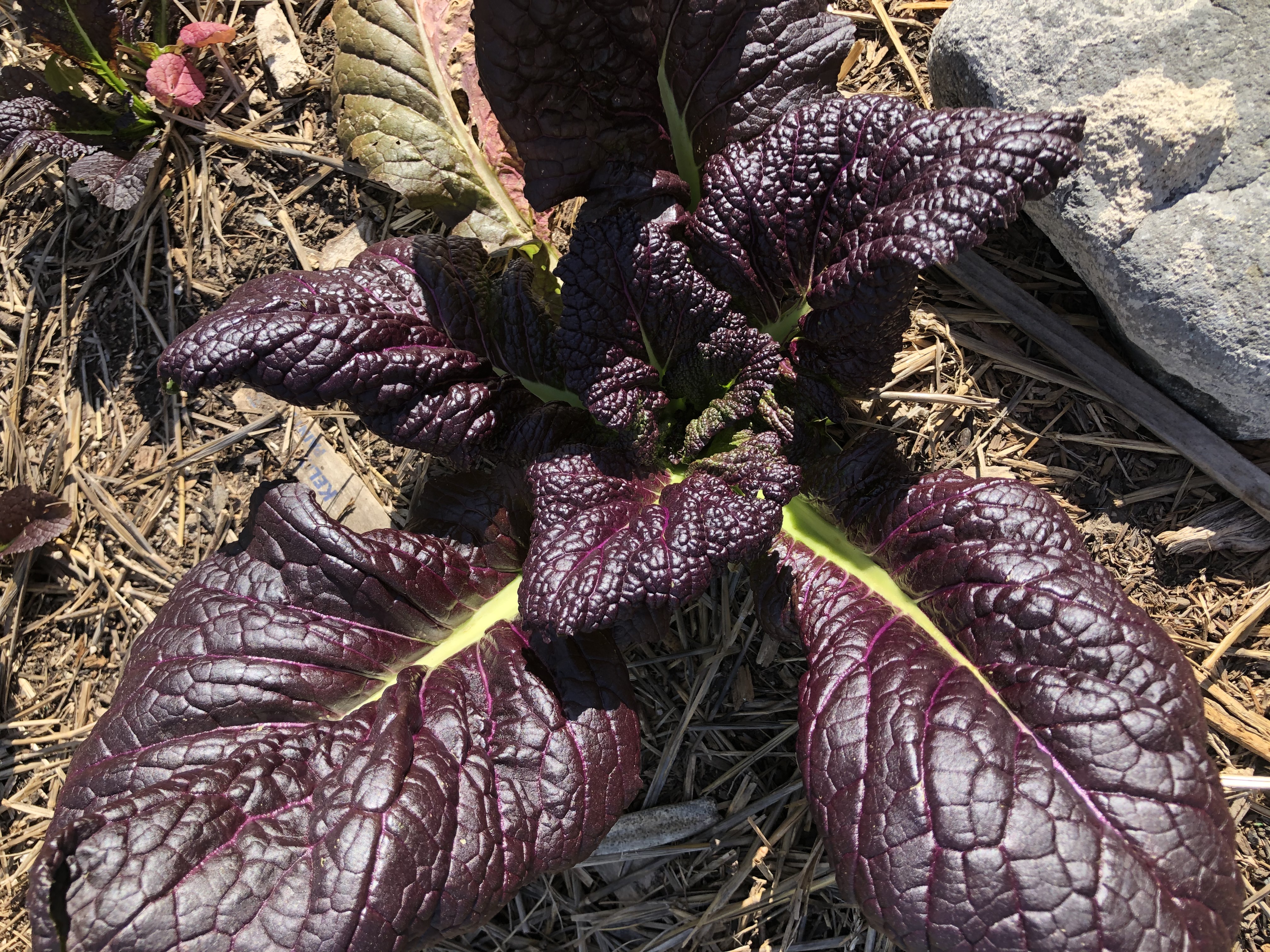 When you think of the food that grows at LA Green Grounds, you easily might think green. Green beans, green zucchini, green peppers. But these days, you’ll find some delicious purple vegetables thriving among, yes, all sorts of green.

The kohlrabi, mizuna and purple mustard are all delicious. The mizuna and mustard are harvest by individual leaf, rather than taking the whole plant. And unless you are feeding a crowd -- something few of us are doing these days -- you don’t need many leaves for a meal. 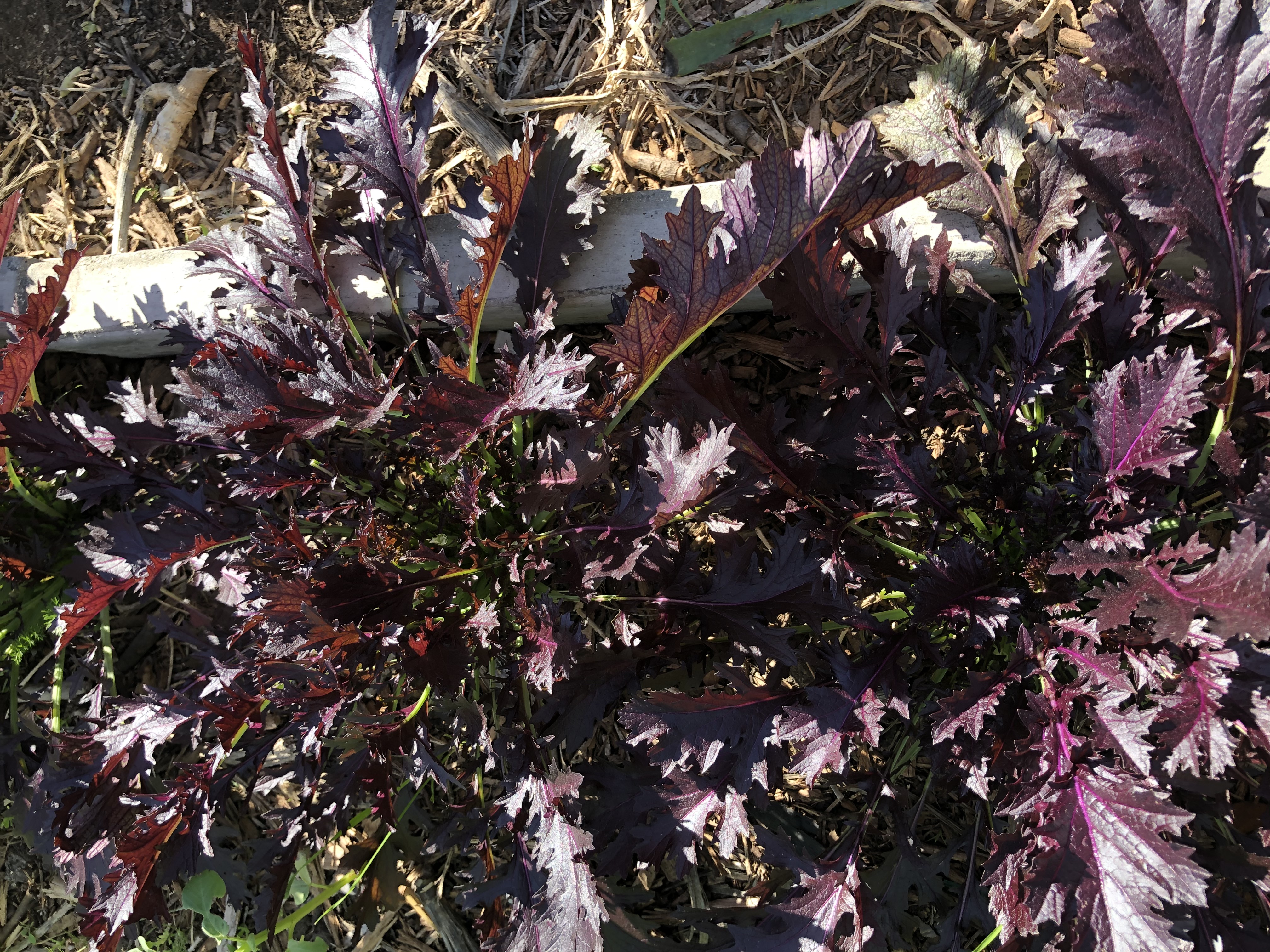 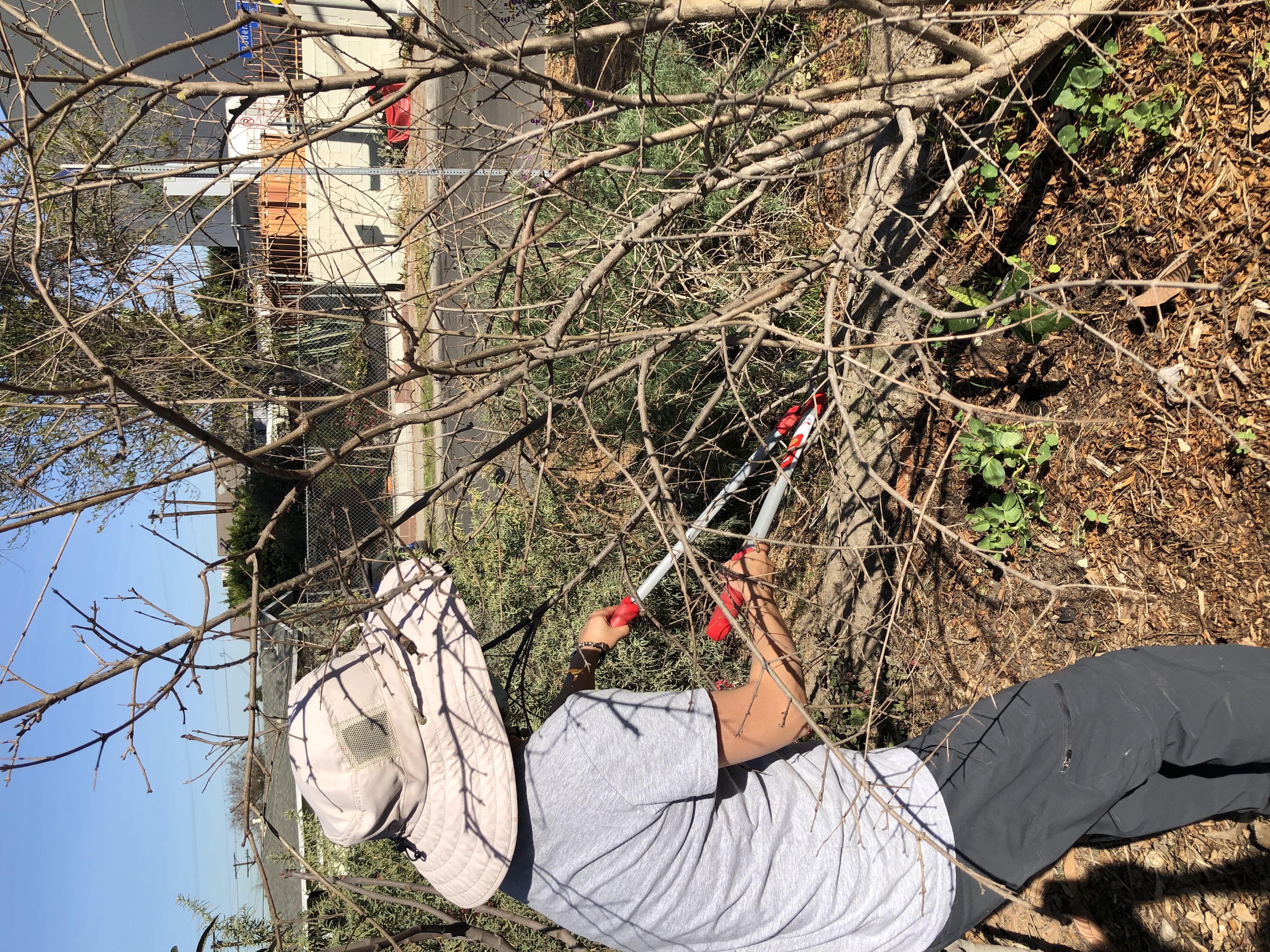 “Pruning is an art,” says Florence Nishida, the founder of LA Green Grounds.

And a daunting one at that.

Fruit trees are pruned in their dormant stage, and several needed winter pruning at the garden, including the fig, stone fruit and pomegranate trees. So, with attention to Covid-19 social distancing, three people gathered with Florence to do some pruning.

Pruning is done to keep a tree at a particular size, to keep the tree healthy and to ensure bountiful fruit. And that’s just the start. Particular branches should be cut – as Florence noted, the three Ds: dead, deranged and diseased branches. And the cuts need to be made in particular ways. For instance, cuts should be made cleanly, just above a node of new growth.

It’s important to learn from someone who knows how to prune, or to hire an experienced person. If you want to learn more, we recommend taking a look at a book called, reasonably enough, How to Prune Fruit Trees, by R. Sanford Martin. It’s a small book, originally published in 1944, and covers dozens of varieties. 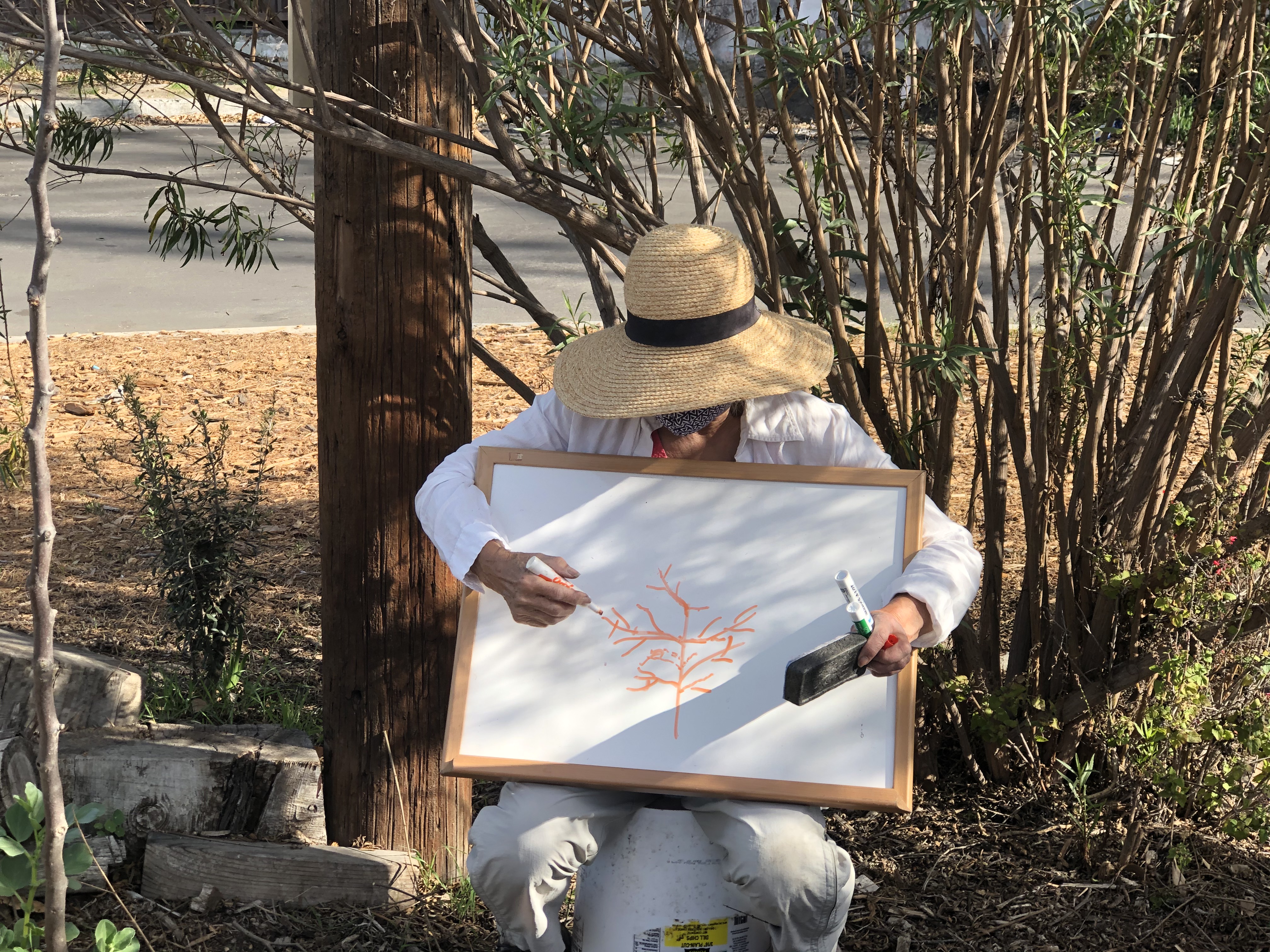 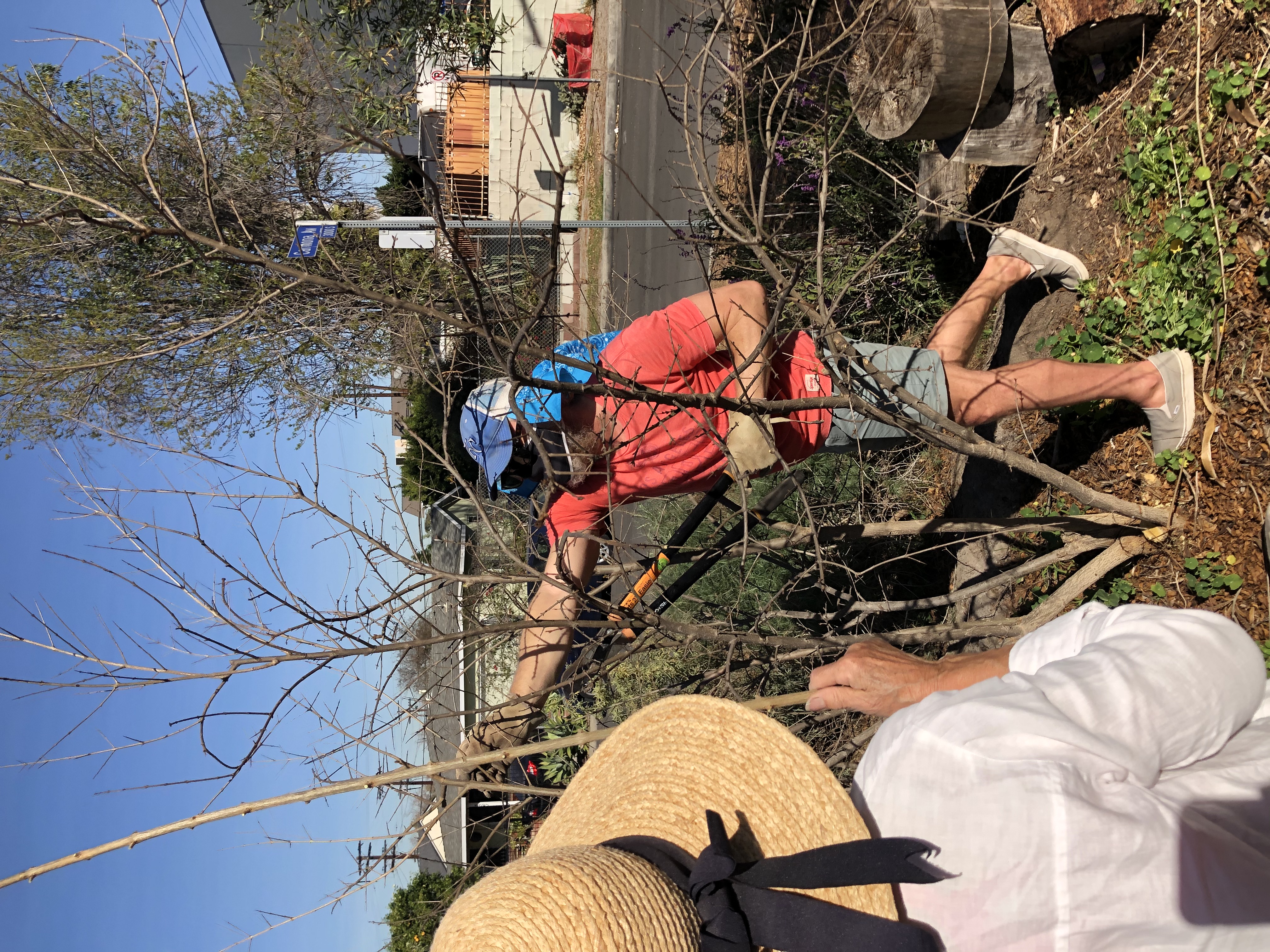 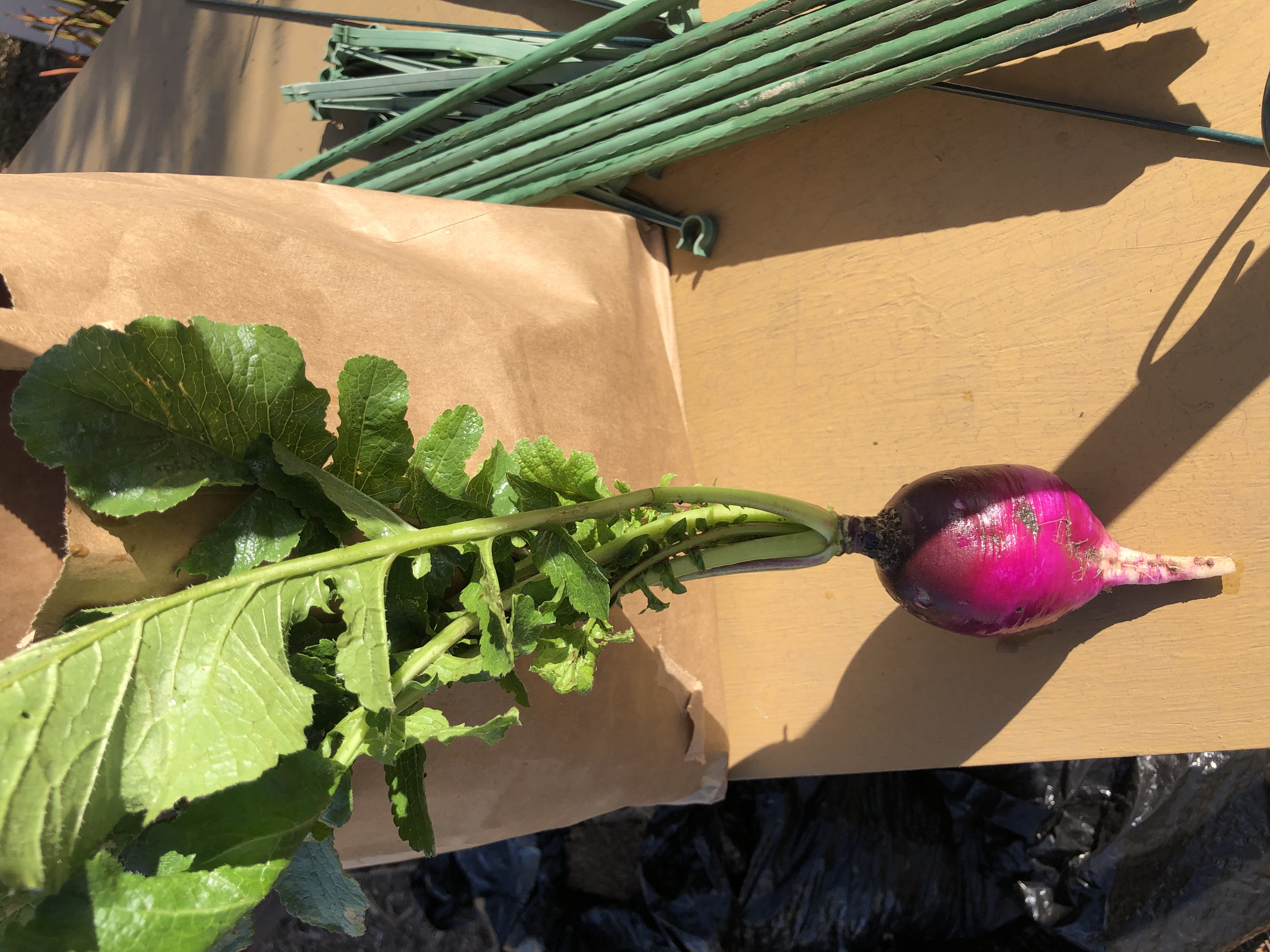 LA Green Grounds is blooming as the new year begins. Everywhere you look there are flowers, frequently with bees or hummingbirds feasting on them. The white and purple fava flowers that soon will yield delicious beans, the marigolds that were planted into the garden after the holiday of Dia de los Meurtos, the vibrant pigeon pea bushes and so many more. Come by, take a look, but of course wear a mask and make sure there are not many people around. 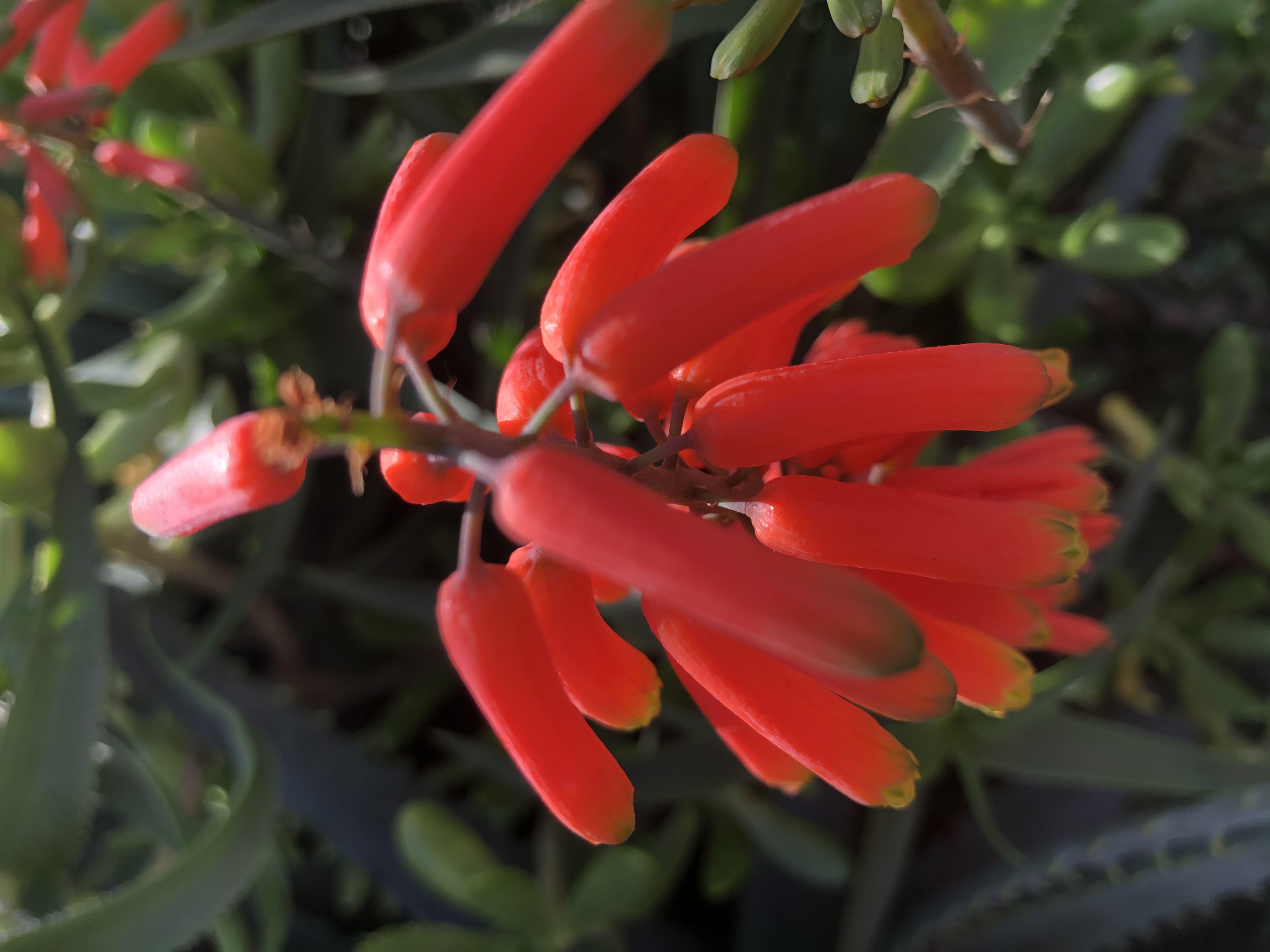 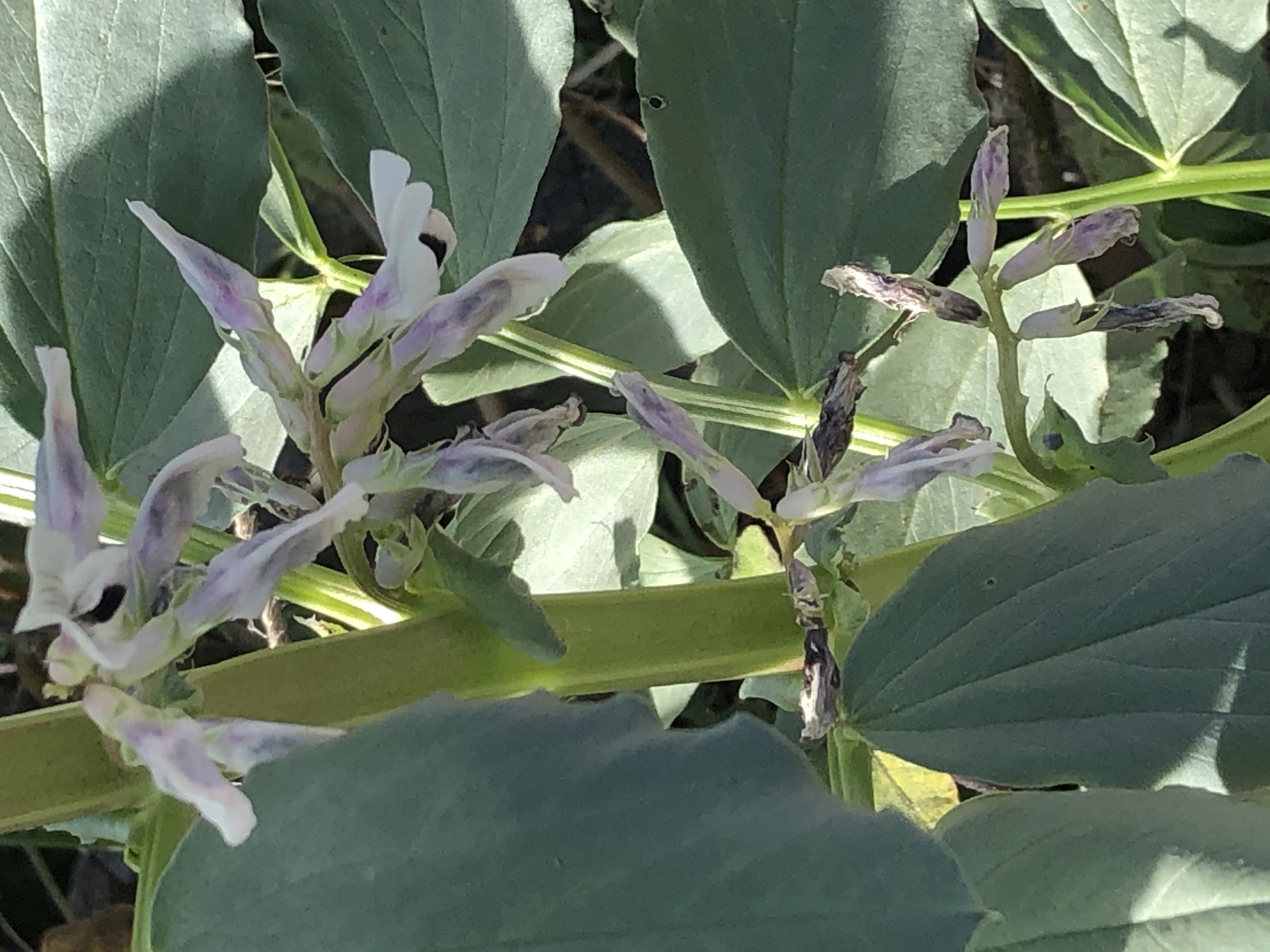 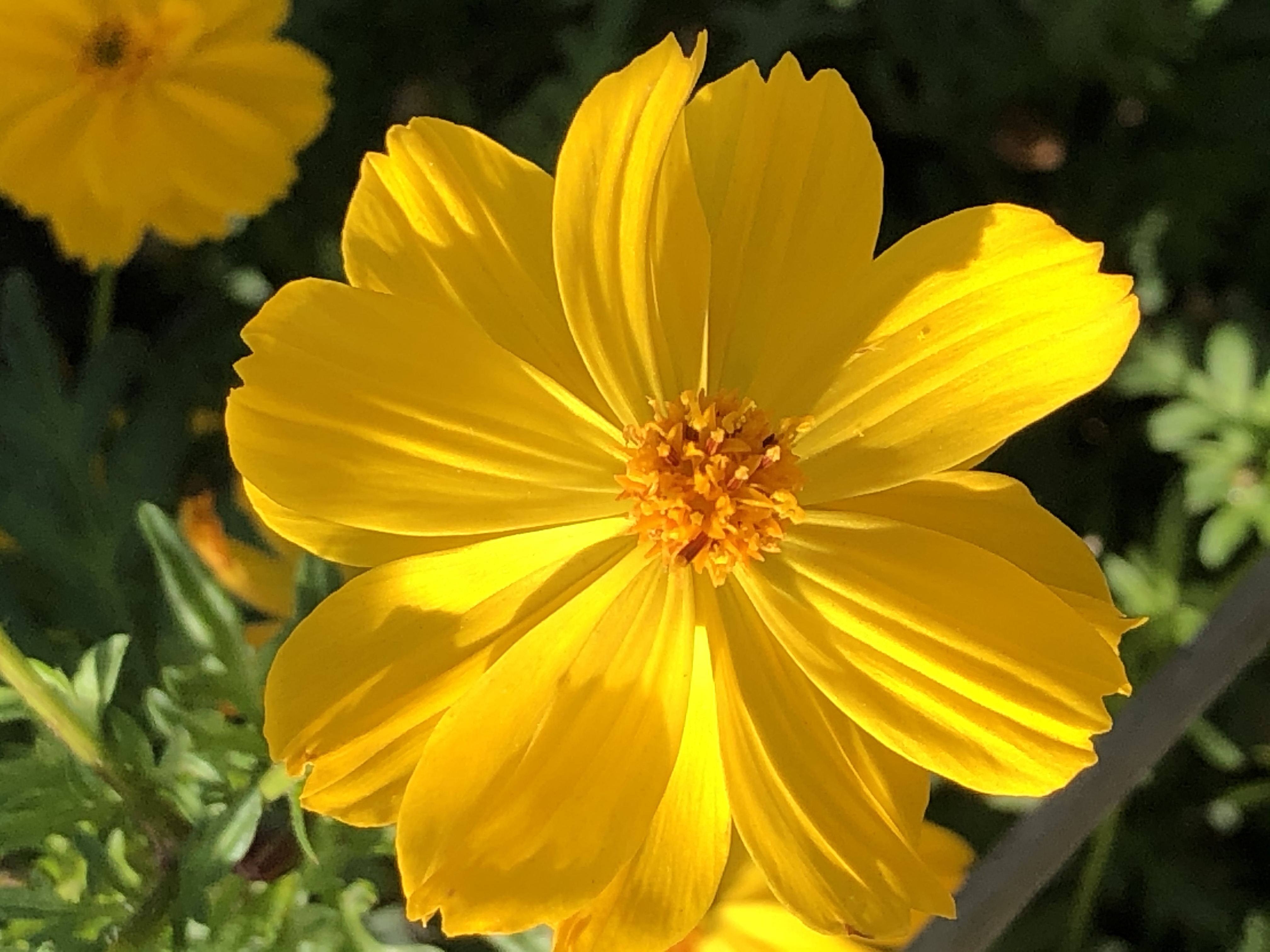 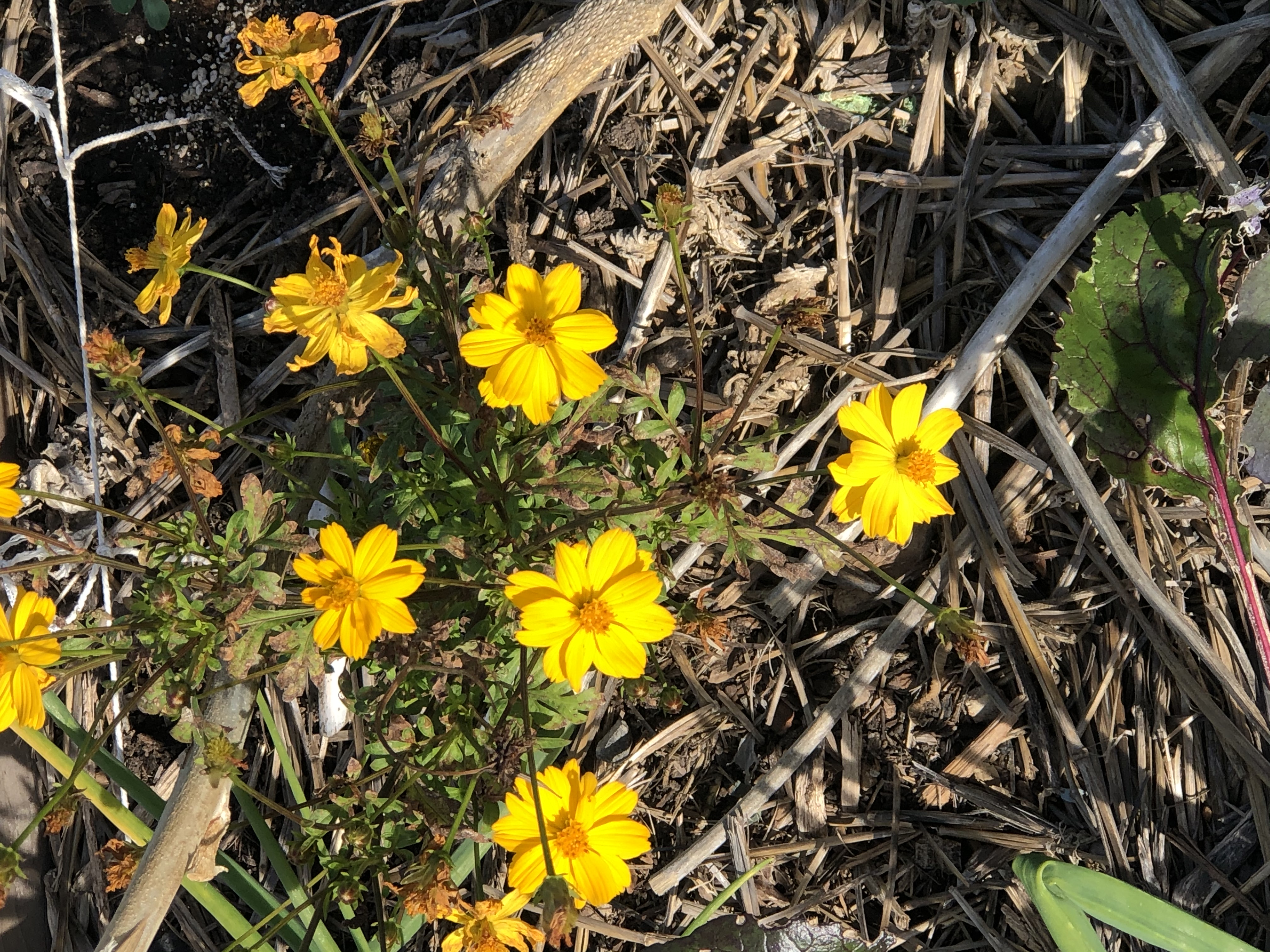 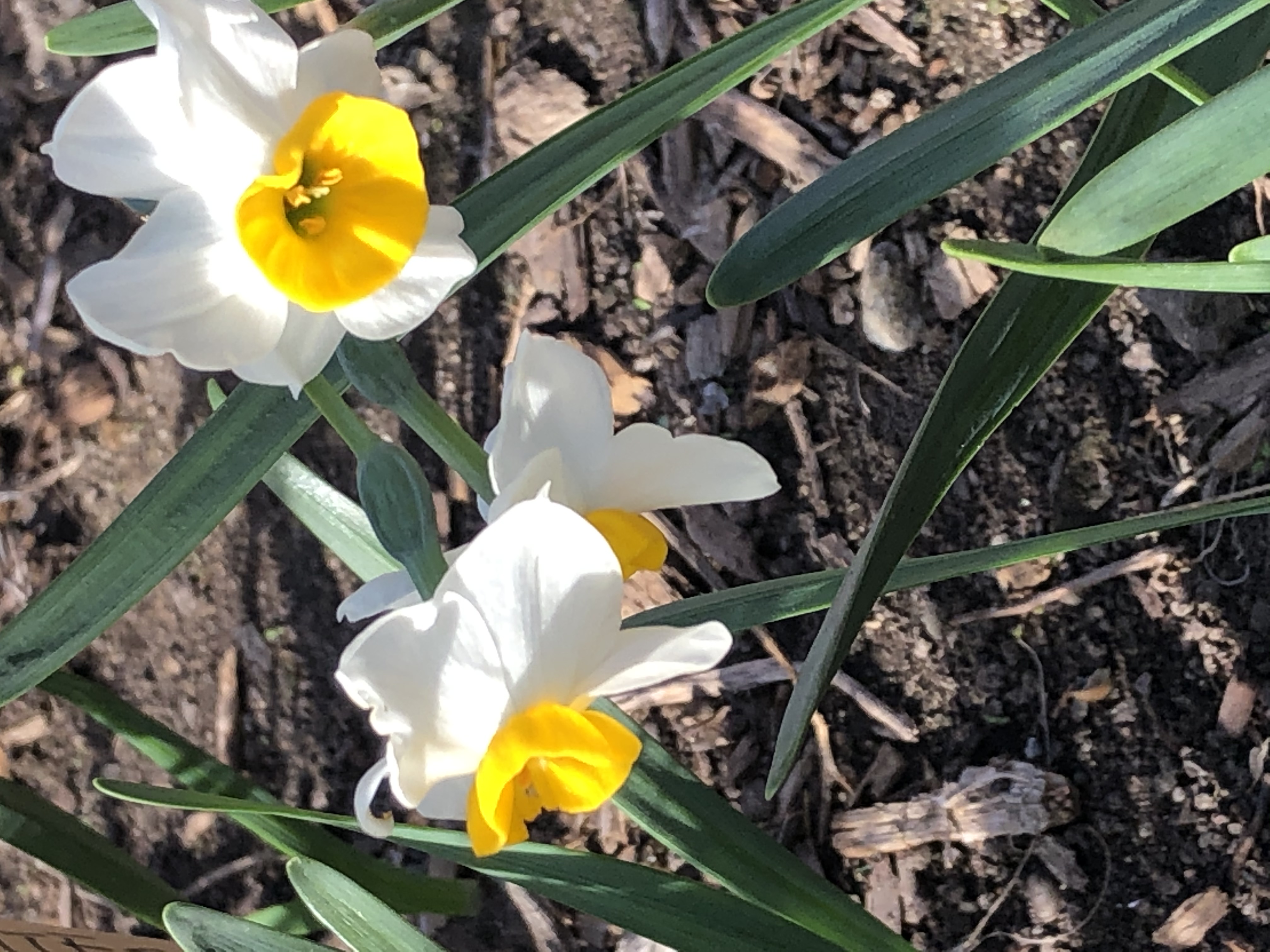 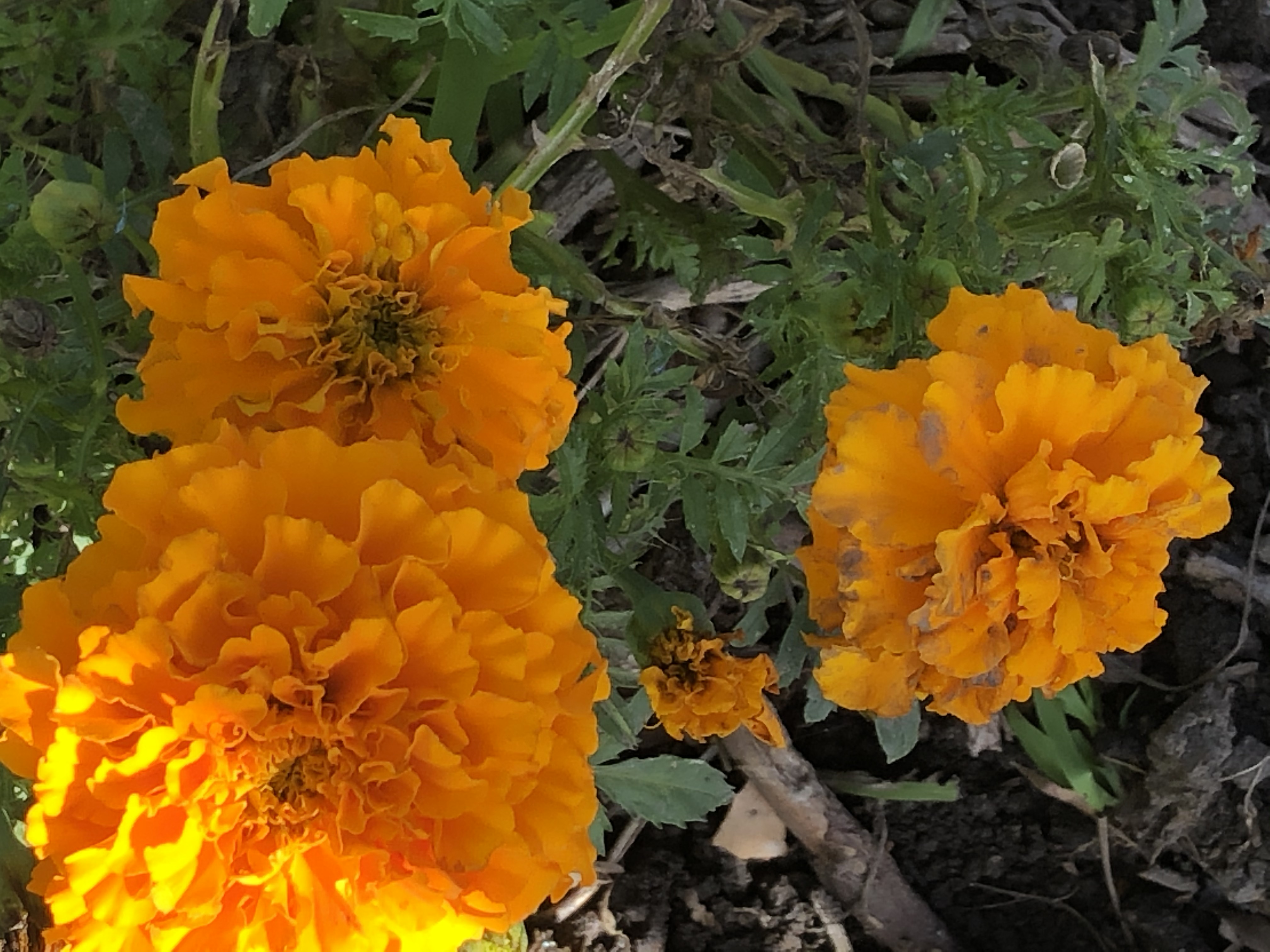 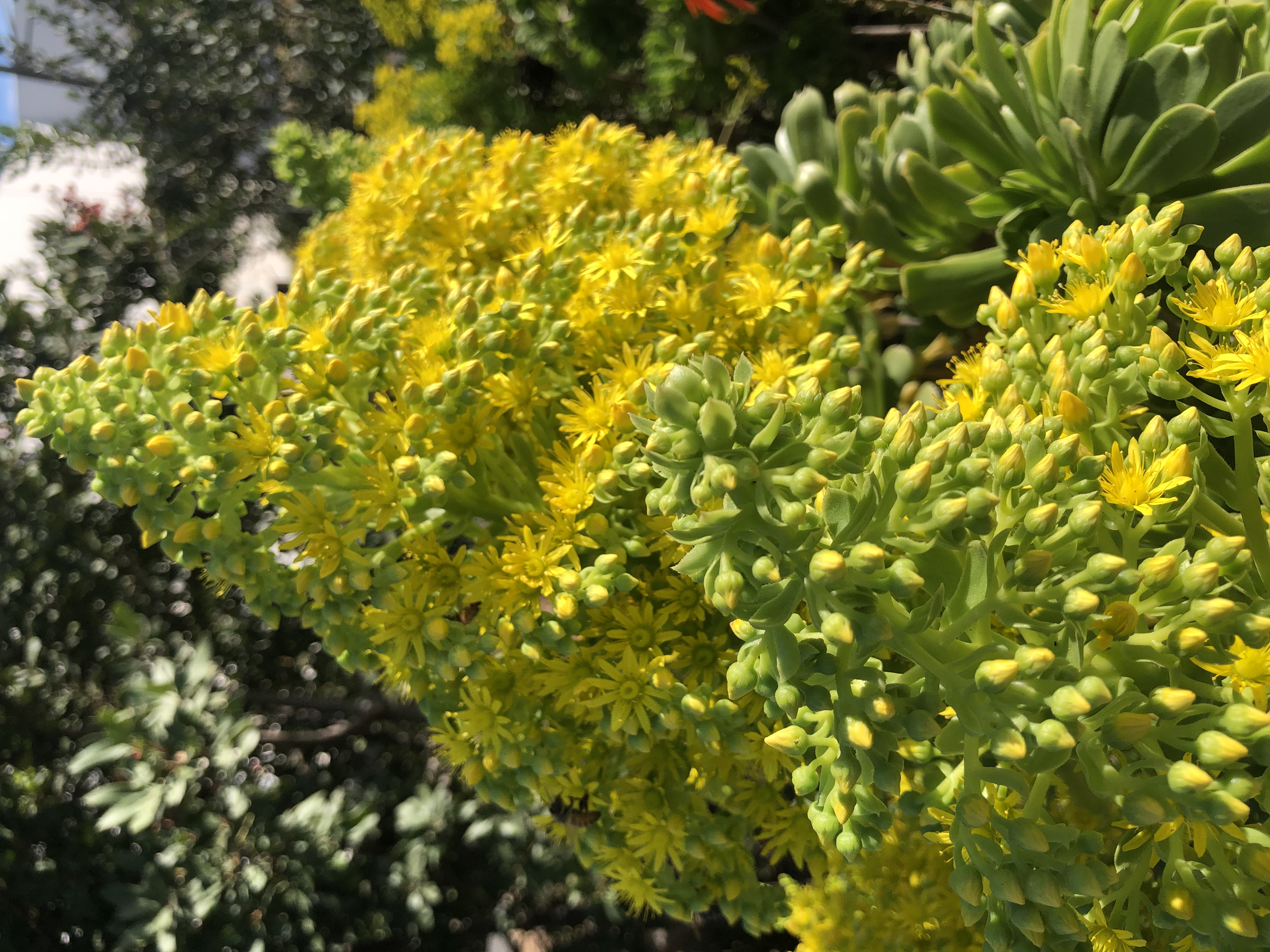 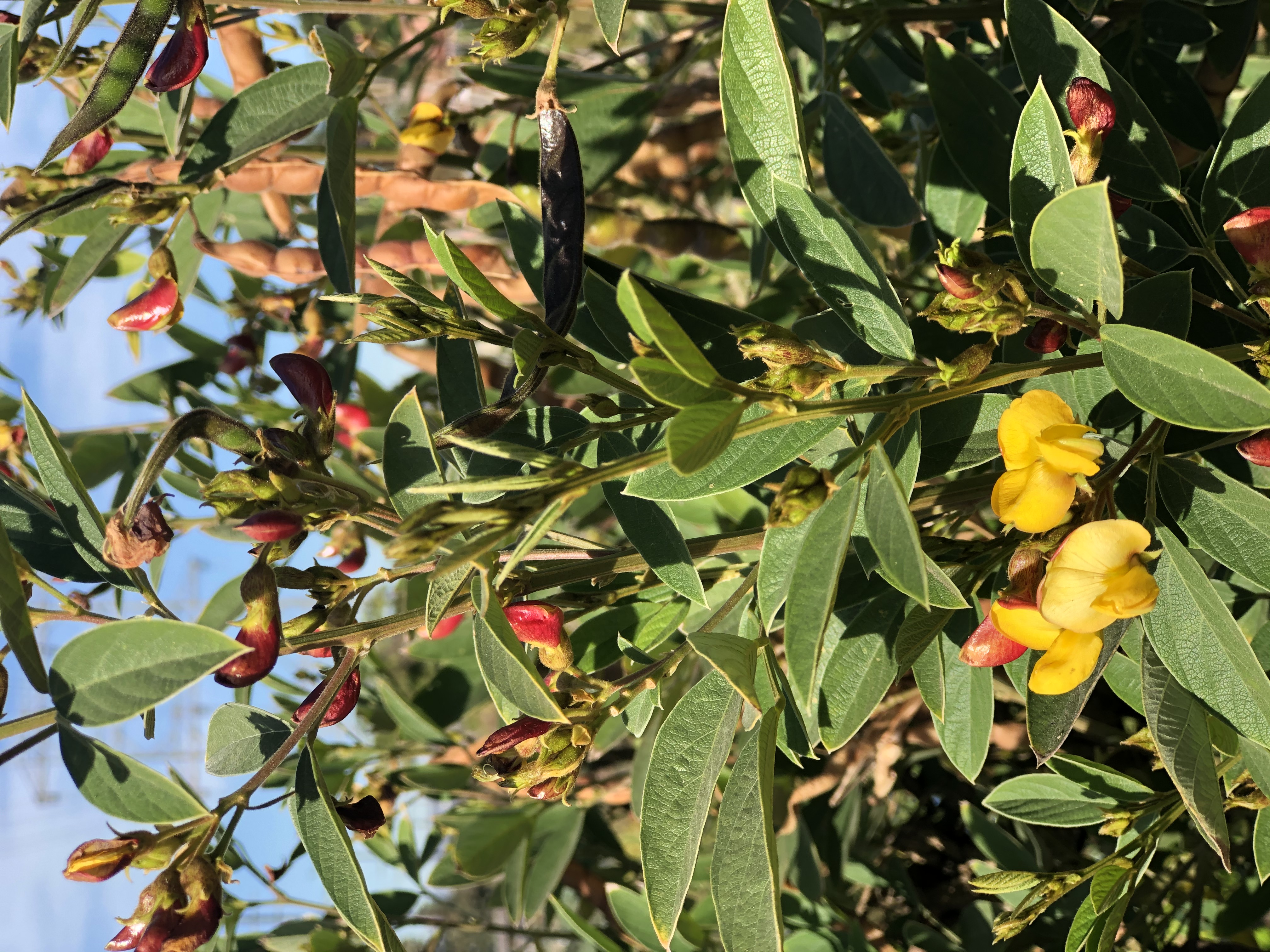