LA Green Grounds is so proud that MG Monthly featured our own Kevin Ridley in the September 2021 newsletter! 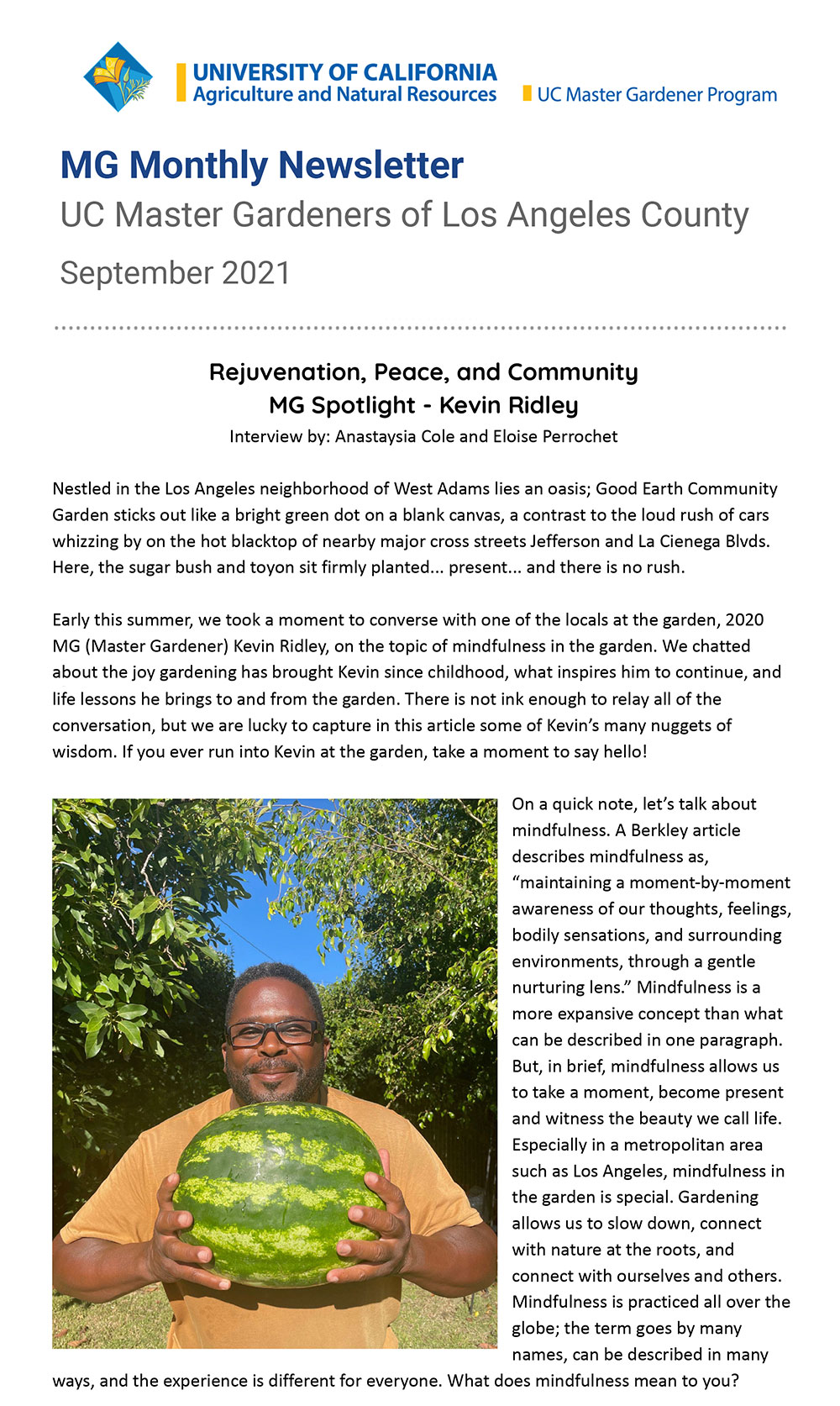 A master gardener transforms a South L.A. food desert into an edible oasis 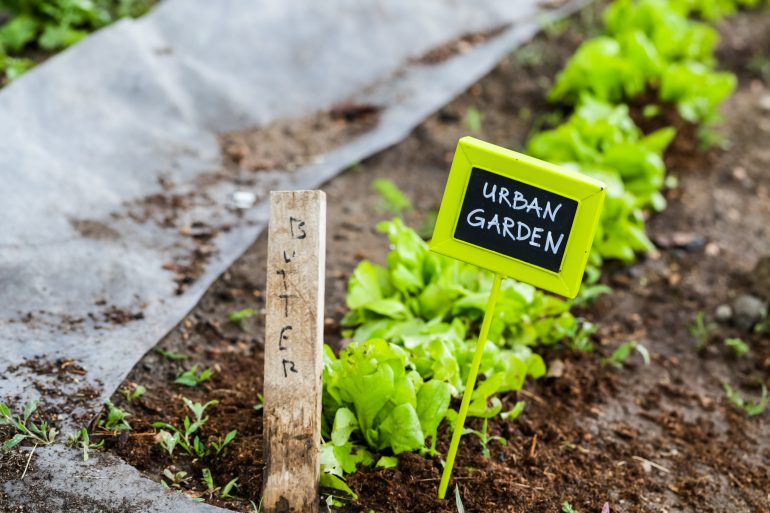 From Museum Gardener, Seeds of Change

From Museum Gardener, Seeds of Change 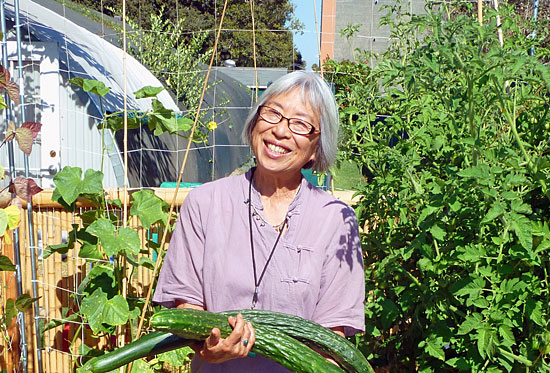 For some, spring is a chance to plant a few tomatoes. For Florence Nishida, it’s an opportunity to re-landscape the face of Greater L.A.

This month, for example, the 75-year-old master gardener will be checking in on some of the 20 or so South Los Angeles yards she helped turn into vegetable gardens. She’ll be sizing up a front lawn and a parkway for makeovers by Los Angeles Green Grounds, the urban gardening group she co-founded.

Saving the World, One Garden at a Time 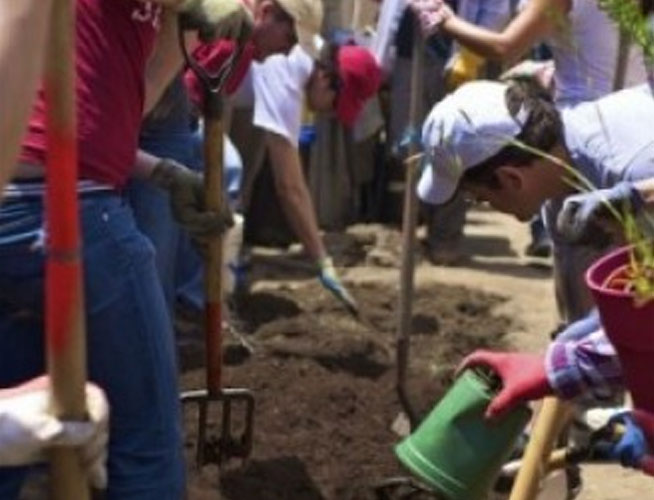 Reporter and LA Activist Sahra Sulaiman provides a personal account of a visit to an LA Green Grounds Dig-In. She interviews volunteer Craig Dietrich and Dig-In host Judy about the groups’s structure and the struggles and rewards that come with organizing:

The tools are also their own. The mulch and compost brought to the dig-in site are free from the city, but require that one of the organizers make the effort to transport it to the site. The only thing the homeowner is responsible for is sourcing any fruit trees that they would like to see planted and inviting their neighbors to join in the dig. In short, the organizers have invested a lot of themselves in making their vision a reality in the hopes that those entrusted with new gardens will carry that vision forward. 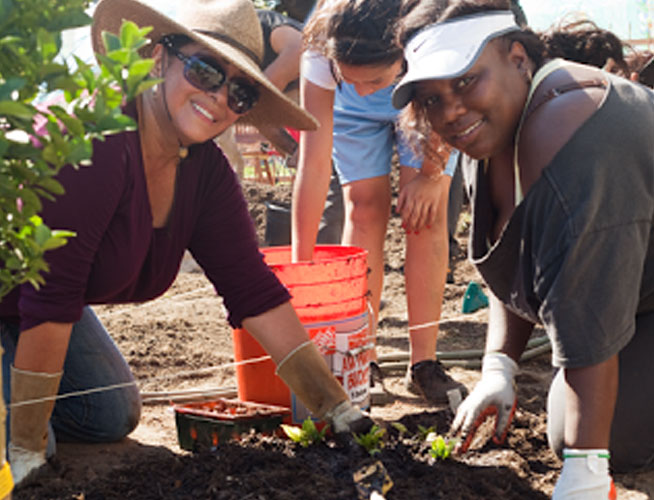 In an era of global politics and economics through technology, it can be hard to stay connected to one another on a basic level even though we are virtually “connected” all the time. Sometimes it is about getting down and dirty with fellow citizens, putting our hands in the soil and actually sowing the seeds for hope and change together. We then come to realize how much we really can accomplish as a collective community and as human beings.

Greening our Food Deserts From the Ground Up

I bumped into Finley at the recent Good Food Festival in Santa Monica, CA. We got talking and he told me about his recent successful fight with city bureaucrats over his community garden and the grassroots initiative he’s set up to help urban communities to grow healthy, organic food for themselves. From the outset I liked the man, and we were clearly fighting the same fight, just on very different fronts. His story was as inspirational as anything I had seen or heard before.

Growing a Garden, and a Community

An edible garden set up early in LA Green Grounds‘ history inhabits a curbside parkway, and what was once turf is now a gathering space in the neighborhood. As written by the LA Times’ Steve Lopez:

Finley, who studied gardening in a UC Cooperative Extension class taught by Florence Nishida, later hooked up with Nishida and a couple of other folks to address what they call the food desert in South Los Angeles, where healthful options are in short supply. The group is called L.A. Green Grounds.

“We try to locate people who want to grow vegetables but don’t know how,” said Nishida. “We go out and visit the property and make sure it’ll work. Does it have enough sunlight? And we want to assess the person to make sure it’s sustainable, because a garden is a lot of work.”

The City of Los Angeles cited the garden for violation of curbside regulations. However, the City worked with LA Green Grounds and homeowner Ron Finley for a successful resolution:

Great news from South Los Angeles: due to a large swell of collaboration between Ron Finley, LA Green Grounds, and the city, the hearing on Ron’s parkway garden (mentioned in a previous post) has been postponed indefinitely, an indication from the city that the garden has been accepted into the community. Change.org picked up this beat this morning.

UPDATE 8/22/11: Change.org just got word that the hearing about Ron Finley’s garden has been postponed until further notice. This is a great sign of progress, and we will update you with more information as it becomes available.

This is a wonderful encouragement of urban farming. If you, or those around you, are interested in beginning your own edible garden, let Green Grounds know by contacting us at [email protected]. The next Dig-In could be at your place! 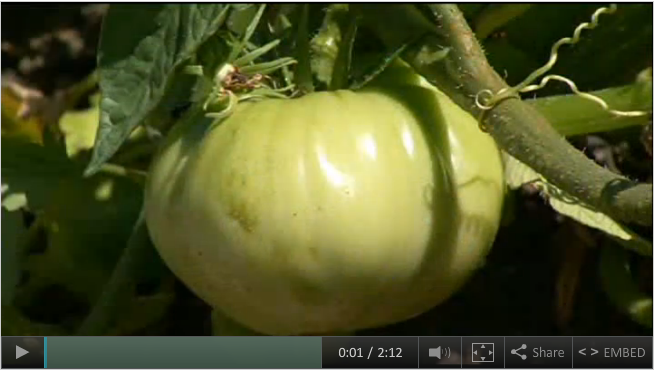 As discussed below and on our blog, LA Green Grounds and Ron Finley set up an edible garden at Ron Finley’s residence. The catch? It was a curbside park, that used to be turf. NBC Los Angeles features the garden both on air on on print:

“They consider this their garden. My thing is bring some, get some. Bring a shovel, a seed, weed, pick up some trash, harvest, help the harvest, just pay it forward,” Finley said.

However, not everyone liked the parkway transformation and someone complained to the city, which then cited Finley, and told him to get a permit or pay a hefty fine.

Once word got out, the community mobilized around the garden, and the city backed off, cancelling a hearing scheduled for Friday.

The victory goes to the garden, which continues to feed the neighborhood.