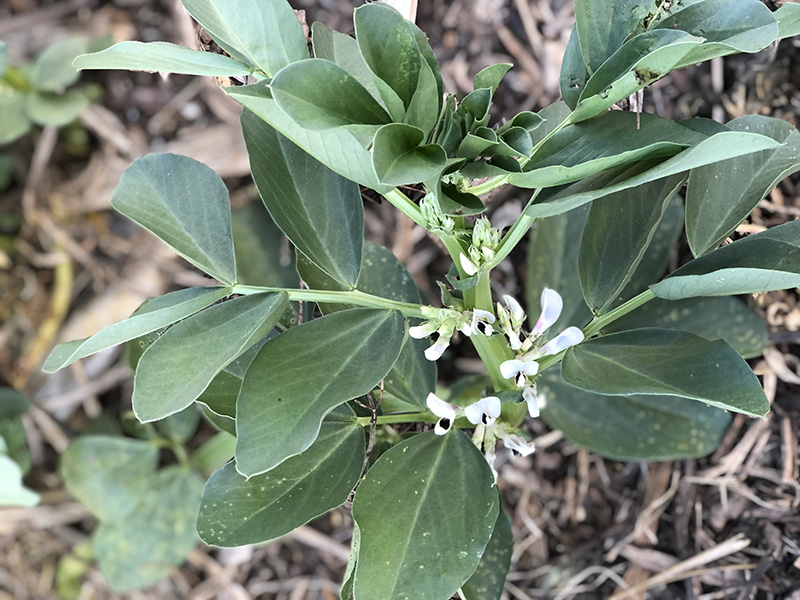 These hearty plants, with their delicate flowers, are popping up all over LA Green Grounds, in the beds set aside for plants, in the paths, around the compost. They are fava bean plants, and they do much more than produce beans.

Favas, also called broad beans, come in many colors and are delicious when cooked, but many people plant them as a cover crop because they are good at fixing nitrogen in the soil. Cover crops are used to protect and improve the soil – a great, inexpensive alternative to fertilizers.

When Florence Nishida began LA Green Grounds, the soil was "packed down, never cultivated before, and who knows whatever spilled or was used there," she said. "Our garden didn’t even have weeds growing – oh, a couple of bindweed."

She decided the garden needed plants that would add nutrients, would penetrate the ground with their roots and would provide food.

But before planting the favas, she and other volunteers used shovels and pick-axes to open the cement-hard ground, she said. They added city-made compost, about 6 inches thick, and mulch. On that, Nishida scattered beans in January 2016.

"It was surprising how many germinated," she said. "That spring, we had a pretty good crop of fava beans, scattered throughout the garden."

The beans – along with California poppies – were dropped without regard to what was a bed or what was a path.

Growers don’t always wait for their cover crops to produce food; often, they cut the plants down before that so they can plant other things. But at LA Green Grounds, the favas were left growing until they went to seed.

"After that year, we had an abundant fava bean crop - so much that it was nearly a fava bean jungle" each of the next three or four years, Nishida said. In 2019, gardeners cut many of them down to make way for other things. Nishida said her philosophy is to let them grow unless the space is needed.

Once the plant produces its seed pods, the nitrogen is being used by the plant, rather than collecting in the roots. But if the plants are pruned, as they are now, the cut pieces can be chopped for compost or used as mulch.

"Anyway, it's like the welcome guest who came for dinner and never left," she said.

The black and white flowers on the plant, if left, will mature into thick pods. The beans are flat seeds found in the pods.

If you are intrigued, fava is a cool-weather crop that can be planted in fall for spring harvest, and at home you don’t need to spread them everywhere.

The pods are edible when young, and one year, volunteer Beth Goldfarb roasted them for the garden volunteers.

It’s more common to eat the beans. They’re a bit labor intensive to prepare because once you’ve shelled them, there’s another skin on each bean to remove. In spring, they’re delicious with spring onions and mint. They can be sauteed or pureed as a dip. They star in the traditional Egyptian dish called ful. Here’s one of many ways to prepare it.